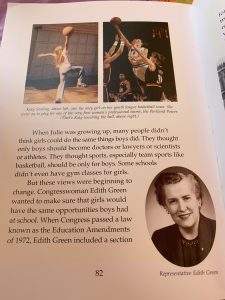 There are a lot of athletic American Girl dolls that exist in our store. Girls like Julie, Mia, Chrissa and McKenna all participate in a sport of their choice: basketball, ice skating, swimming and gymnastics respectively. What these girls have in common is that they gain something out of playing a sport. They gain confidence, skills and life lessons.  We wouldn’t be hearing about these stories if it wasn’t for Title IX however.

Title IX is a federal civil rights law from 1972 that not only opened up opportunities for female athletes in school but also prohibits discrimination on the basis of sex in any federally funded education program or activity.  This is a central theme in the American Girl story about Julie Albright, a 9-year-old girl in 1974 who loved to play basketball.

I summarize these American Girl stories for you to enjoy.  Girl AGain has many of these dolls and their books.  You can also get the books at your library.

There is a sport for everyone.  You can get your doll an American Girl sports outfit by ordering a care package from Girl AGain for only $19.95 (including shipping)! 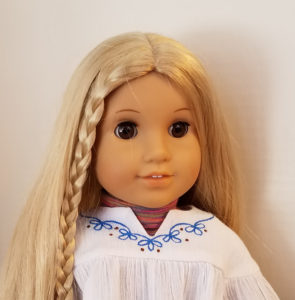 Julie is a girl who enjoys playing basketball. She is struggling with her parents’ divorce. Though she is good at playing basketball, she is often tormented by her classmates for being a “tomboy” because she does not do the traditional things a girl would do at a young age such as playing with dolls. In the end, she gets a chance to play on the boys’ basketball team despite being a girl. Julie’s story on dealing with change helps girls understand that change does happen and they need to learn how to deal with changes in their lives such as divorce. Change can sometimes be a good thing to experience in life, and sometimes, girls find a way to make their own changes and learn new skills and life lessons. 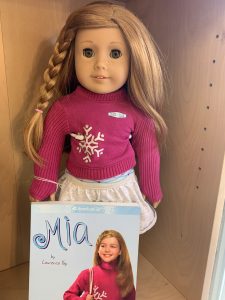 Mia is a girl who participates in ice skating. She is the youngest of the four children who grows up with three older brothers, playing hockey on the local rink just for fun. She wants to become a figure skater so that she has a chance to step out of her brothers’ shadows. At first, Mia has trouble keeping her balance on the ice as she slips and falls down a couple of times. In addition, her brothers often tease her about doing figure skating. Despite being teased by her siblings as well as her enemy Vanessa, Mia inspires other girls to do what they want to do and just ignore the teasing that follows them. Mia’s story on improving her skills as a figure skater shows girls how they shouldn’t give up on an activity just because someone is teasing, hurting or disagreeing with them. 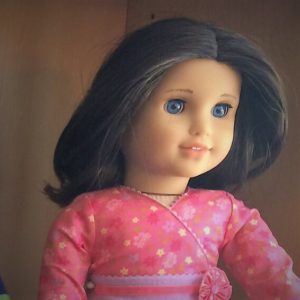 Mia’s story is also related to Chrissa’s story. Chrissa is a girl who participates on the swim team.  Her enemy, Tara James, bullies Chrissa both on the swim team and in her fourth grade classroom. In the movie Chrissa Stands Strong, Chrissa becomes overwhelmed when she finds someone posted a nasty rumor about her on the school’s swim team website. In addition, her brother Tyler becomes involved in an accident while being intimidated by Tara into doing a difficult dive off of the diving board. As a result, Chrissa quit the swim team due to being bullied by Tara. She later rejoins the swim team for the upcoming competition after learning how to speak up for herself and to be confident in dealing with bullies. Chrissa’s story on standing up to bullies shows girls that they need to speak up for themselves if they are being bullied and to not quit an activity just because they are being bullied. 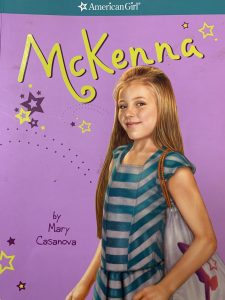 McKenna’s story is a bit different. Though she excels in gymnastics, she is struggling with her schoolwork, specifically reading comprehension. McKenna’s teacher gives her a reading tutor to work with during her gymnastics practices though she doesn’t like it at first. Throughout her story, McKenna learns to balance her activities and schoolwork to maintain good grades so she can pass the fourth grade. McKenna’s story on balancing school and gymnastics shows young girls that they need to deal with doing things they don’t like and doing well academically and in their favorite activities.

The stories of McKenna, Chrissa, Mia and Julie all share a common theme: facing difficulties. You can enjoy their stories from their books, many are for sale at Girl AGain.

As a trainee with Yes She Can, we learn how to deal with some of the difficulties associated with autism. Trainees learn how to be flexible with changes that happen in the store such as shifting from one task to another, greeting customers and working with coworkers. 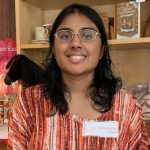