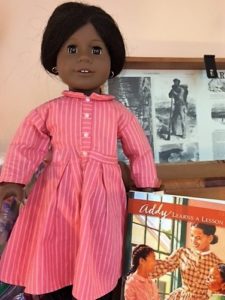 Addy Walker was born and raised on a cotton plantation with her parents, her older brother, Sam, and her baby sister, Esther.  But they do not live there as the owners of the home. No…the master of that home owns them.  Addy and her family are slaves.  Slaves were people who were forced into a life of labor with no pay.  They were not considered real people, seen by their superiors as little more than farm animals that could be traded or sold at will by their masters.  They had no rights whatsoever, meaning they could be abused and never get any justice for it.

After Master Stevens sells Addy’s father and brother to another plantation, Addy and her mother run away to freedom in Philadelphia.  But once they settle there, Addy finds that her new life, while much better than her old life, is not as perfect as she had imagined it.  Yes, Momma now has a job that pays, Addy gets to go to school, and they live in an apartment that is ten times nicer than the barn in which they slept on the plantation.  But black people are still denied services, jobs and even rides on the trolley because of the color of their skin.

In this new world, Addy must rediscover her courage and keep her hope.  Hope that things will change for the better. 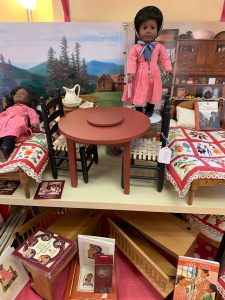 Hope to meet people with kind, unprejudiced hearts.  But most importantly, to her, hope that her family will reunite in freedom.

If you want to learn more about Addy and her world, read her books or check out her items here at the Girl AGain store!  From the clothes that are based on the style of the 1860s, to the wide collection of items from her stories, we have plenty to help you learn about Addy and her life growing up during the Civil War, a war fought to reunite America.