Maryellen Larkin is a 9-year-old American Girl in 1954.  She is a spunky, energetic and creative girl, growing up in the 1950’s, the age of rock ‘n’ roll, poodle skirts, and red Cadillacs.  World War II is over, and the citizens of the USA have declared that its time to let loose and have fun!

Unlike other girls, Maryellen longs to stand out from the crowd.  That’s not easy when you’re the middle child in a family of six brothers and sisters.  Maryellen is kid number three, right behind Joan and Carolyn, who are in high school and tend to see Maryellen as a immature, irresponsible little kid.  Her little brothers, Tom and Mikey, are pests, and snooty little sister Beverly loves to boss everyone around.  With so many siblings, Maryellen finds it hard to feel special.

Lucky for her, TV provides the perfect escape from her everyday life.  In the 1950’s, the birth of television produced many classic programs, such as I Love Lucy and The Twilight Zone.  Maryellen’s favorite shows are The Lone Ranger and Davy Crockett.  She loves the exciting adventures experienced by the title characters, and enjoys making up episodes where she gets to be the hero.

Maryellen doesn’t think she’ll ever get to have a real adventure of her own.  But as she enters the fourth grade, she finds many surprises waiting for her, from a new friend to the science fair to an unforgettable birthday.  As she helps kids fight polio, travels towards a white Christmas, and sends a rocket-and her dreams-soaring to the stars, Maryellen realizes that she doesn’t need to be a TV character to know that she’s one in a million.

Colleen recently joined the Yes She Can program.  She grew up reading all of the American Girls Collection books. 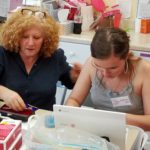