So this Halloween, your daughter might want to dress up like a superhero. Why not get her doll a costume to match?  We have super-heroine costumes for American Girl dolls and why wouldn’t we? Superheroes are one of the hottest things on the planet right now. It’s no wonder girls of all ages are in to and want to be superheroes. From Wonder Woman to Captain Marvel, girls are taking over the genre. To be honest, women have not always had the best representation in the superhero genre. In the 60s, Wonder Woman, one of the most powerful superheroes, was the League’s secretary (not that secretaries aren’t valuable, but in this case it was like using a katana as a letter opener.), Captain Marvel was male, and Supergirl was a whiny teen. So all in all not a great representation.

Superheroes used to be a male dominated genre. A decade ago if you asked a person on the street to name superheroes, they probably would have said Superman, Spiderman or Batman. Nowadays, people will name all sorts of superheroes, from Black Widow to Wonder Woman to Captain Marvel.  The TV Network CW is probably most well known for its DC universe shows. They actually have more Female-led superhero shows then male lead ones, from Supergirl and Batwoman, to their ensemble cast Legends of Tomorrow, 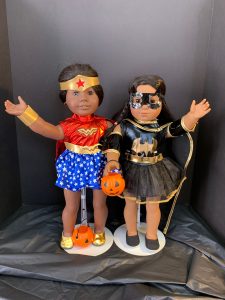 headed by the White Canary, Sara Lance. One of the most popular DC movies is Wonder Woman,  and Captain Marvel is in Marvel’s exclusive ‘Grossing Billion dollars’ club by grossing 1.128 billion. What I’m getting at is super-heroing is no longer a man’s game, and often women are the most powerful. Marvel has gone on record saying Captain Marvel is the most powerful superhero in their roster, and on the show Supergirl, Supergirl has beaten Superman. The point of all this is to say super-heroines are here and they are here to stay.

In the store we have multiple super-heroine costumes for the standard American Girl doll and for the Wellie Wishers, in various styles. They can be your girl’s side-kick for the evening! From colorful show-offs costumes, to dark sneaky costumes, we have the superhero costume you want. And if you or your daughter aren’t into superheroes, we also have more traditional costumes as well. The store is your one stop shop for Halloween for American Girl! 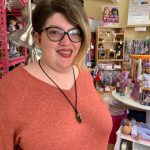