This past Memorial Day was all about remembering and honoring those brave soldiers who risked everything, including their lives, to fight in wars, whether it be serving overseas or battling on home soil.  We have been reflecting on this special day, and we think that it is important to remember why they fought for us. Below, we look at wars through the stories of American Girls. 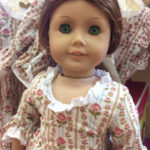 Felicity did her best to support the ambitions of her friend Ben, who longed to fight for freedom under General George Washington in the Revolutionary War.  This was the first war where we fought not under rule of the British, but as our own independent country. The Patriots had built the colonies from the ground up on their own, and had grown out of the need to pay obedience to foreign laws of England.  It was time for them to win their independence.

Addy was thrilled by the North’s victory in the Civil War, because not only were the North and the South a single nation once more, but it was a nation with no slavery.  The South of the U.S.A. had separated from the North for selfish reasons, because they disagreed on President Abraham Lincoln’s new laws banning slavery. After fighting their own U.S. citizens for too long, the two sides reconciled and reunited as one, restoring unity to their home. 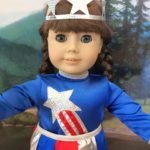 Molly was sad when her father had to go overseas to tend to wounded soldiers in England, but she knew it was for a good cause.  The British soldiers, the Allies, needed America’s help to defeat Adolf Hitler and his Axis Forces. If not, Hitler would dominate all of Europe and rule as dictator.  While the war raged in Europe, Molly and her fellow Americans did everything they could to contribute to victory, from donating scrap metal and blankets to holding fundraisers for the army.  It was worth it to help their friends on the other side of the pond.

To learn more about these wars and how they impacted the lives of our American Girls, come check out the books we sell here at Girl AGain, such as Felicity Saves the Day, Changes for Addy, Molly Learns a Lesson, and many more adventures in history.  It was these books and others by the American Girl Historical Collection that inspired my own love of history, and led me down the path to working here at Girl AGain.