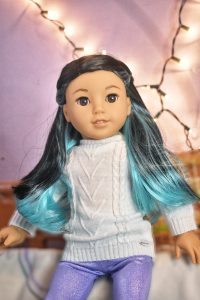 The second hand of the clock ticks closer to midnight and there’s an essence of anticipation as new year’s eve comes ever closer to new year’s day. For most this moment means the start of the new year, but for American Girl fans it means the release of a new Girl of The Year doll.

American Girl has released a new doll at the beginning of each year since 2001, and at the end of the year, she retires to make way for the next character.  This year that character is Corrine Tan. There are many exciting things about Corrine,  her blue hair highlights,  her little sister,  her skiing outfits, and accessories, but possibly the most exciting is the fact that she is Asian.

Very few Asian Girl of The Years have been released.  In 2006 there was Jess, a girl who traveled to Belize with her family, who was half Japanese. Then in 2011, there was Kanani, a girl learning about the Aloha spirit in Hawaii, who was half Polynesian.

So finally having another Girl of The Year who is Asian in 2022 is a big win for diversity in American Girl. I asked my friend who is of Korean descent what her thoughts on an Asian Girl of The Year were, “It’s incredibly inspiring and moving to see a doll that looks like me because all people need to see that their uniqueness is celebrated and something to be proud of. I love that Corrine’s culture is also showcased because growing up, I noticed that cultural traditions in addition to my external appearance were different from the majority.

Corinne’s story really shows that diversity is beautiful”! Personally, I have been excitedly awaiting Corrine’s arrival for many months and cannot wait to add her to my collection.  Remember you can find past Girl of The Year dolls like Kanani, Jess, and more at Girl AGain.

By Mo, Yes She Can trainee