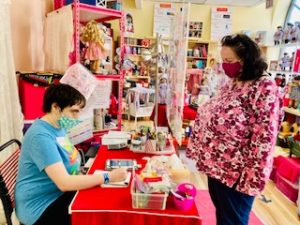 There’s a song that can explain my social anxiety better than I can. “I’ve learned to slam on the brake/ before I even turn the key/ before I make the mistake/ before I lead with the worst of me” (Pasek & Paul). I started to learn to do this at an early age. “Give them no reason to stare/ no slipping up if you slip away” (Pasek & Paul), if you avoid talking to people you can never mess up talking to people. “So I got nothing to share/ no I got nothing to say” (Pasek & Paul), except I do have a lot to share and say. And I’ve started to learn how by interacting with customers at Girl AGain. You might have seen me answer your email, greet you in the store, or even help you place a phone order recently. But what you don’t know is there’s a lot I’m doing behind the scenes to make these things happen.

Social anxiety is defined by Webster’s Dictionary as “a form of anxiety that is brought about by social situations … in which embarrassment or a negative judgment by others may occur” (“Social Anxiety Definition & Meaning – Merriam-Webster”). For me, this has come about after years of experiencing “embarrassment and negative judgment by others” every time I tried to join a conversation. Sometimes with Autism Spectrum Disorder or ASD, social cues and etiquette are not obvious in the same way they are to a neurotypical person or someone who doesn’t have ASD or learning disabilities. Such is the case for me. So every time I couldn’t hold it in and interrupted someone while they were talking, or said something inappropriate without understanding why it was inappropriate, or said something unrelated to the topic because I didn’t understand what the topic was, I got yelled at or made fun of. So to protect me I stopped talking to people.  Like the song goes “Step out/ step out of the sun if you keep getting burned/ step out/ step out of the sun because you’ve learned/ because you’ve learned” (Pasek & Paul). If you never talk to people,  you’ll never make these mistakes and they’ll leave you alone.

The issue with this philosophy; it doesn’t work.  Humans are extremely social creatures.  We rely heavily upon one another for emotional support, survival, and to meet basic needs. In the workplace, you have to interact with strangers. So,  how do you service customers when you’re terrified of them? Aha! That is the challenge the Yes She Can job coaches have taken on. Together we’ve come up with strategies to help me work past my issues. Firstly,  I can’t just go up to someone and wing it. If I do that all these variables, like what I should be saying and how I should be saying it, will race around through my thoughts and I will freeze. Like a deer caught in the headlights.  Instead, I’ve been writing scripts for myself,  planning out what to say beforehand for different situations.  Second: rehearsal. Through role-playing with the coaches, I’ve been able to explore the different possible avenues the conversation can go down. That way if something unexpected happens I have an idea of where to go with it. Role-playing has also allowed me to get feedback on how I sound to other people before I have to talk to them. So when I do talk to them I can be confident in delivering the information I want to deliver and having it come across the way I want it to. These things may all come naturally to some people, but I can’t take them for granted. I’m working hard for every conversation.

The goal of all this is eventually I will be practiced enough, and have professionally interacted with enough strangers that I feel comfortable doing it.  Or at least not feel like that person might murder me if I make a mistake. Then I can go for a job interacting with the general public, like retail, and finally be able to get some independence financially supporting myself. I am not quite there yet, but every time I interact with customers like you at Girl AGain I’m getting closer.

If you take away nothing else from this story please do not make fun of Autistic people when they talk to you. Especially when you don’t know if they’re Autistic or not since many of us don’t get diagnosed until later in life.  If someone says something you perceive as “weird” in a conversation don’t yell at them or humiliate them, gently correct them and move on. Not everyone experiences the world the same way you do, and that’s actually a beautiful thing.

By: Yes She Can trainee Mo