Listen to “Lift Every Voice And Sing” online: Melody used to sing this particular song in her church choir. Yes She Can trainee Vanessa loves this song. We invite you to listen to this song as you read this blog post.

“Those who do not learn from history are doomed to repeat it.” – Winston Churchill

For most, February means hearts and chocolates as we prepare to celebrate our love for each other. But there’s another type of love we should be preparing to celebrate. This is also a month of remembrance and celebration of Black history. February is Black History Month, a holiday month where we celebrate Black achievements in history as well as acknowledge Black suffering. This is important because several things that Black people and People of Color have had to go through were not right, and deserve to be acknowledged. People of Color have contributed so many things to society over the years that should be celebrated. The Harlem Renaissance, Jazz music, and Nat King Cole to name a few. But Nat King Cole wasn’t accepted as a singer until a white music group discovered him. Even then he faced intense opposition and discrimination, some of which put him in mortal danger, just for the color of his skin.
American Girl has paid homage to Black history by making dolls like Cecile, Addy, and Melody, three Black dolls in the historical collection whose stories center around Black folks’ experiences during their respective time periods. We can learn about Black history from their fictional stories, and remember the real struggles and the real achievements Black people have made during those times.
Melody, in particular, illustrates some of the struggles Black people faced during the 1960s, through the power of music, and her power as an individual.
The 1960s, when Melody’s story takes place, was known as the Civil Rights era. People of Color and their allies stood up against the racist laws of segregation and got the Civil Rights Act passed. The construct of segregation, separating people based on their race, was in place for hundreds of years before then. Separate was not equal, it was a way to hold people down. In her story Melody finds ways to contribute to the Civil Rights movement through her everyday life.
One great takeaway from Melody’s story is that she uses her talents to make a difference. When her sister is denied a job at the bank because she is Black, Melody closes her bank account to show that she will not support an establishment that discriminates in its hiring.

When she is given an opportunity to sing a solo in her church choir she chooses to sing Lift Every Voice And Sing, a song she believes illustrates her experiences and struggles as a young Black girl, ”Sing a song full of the faith that the dark past has taught us,/ Sing a song full of the hope that the present has brought us” (James Weldon Johnson, J. Rosamond Johnson). It goes to show that you don’t need to be wealthy, or famous, to make a difference. Everyone has the power to influence change every day. If you really want to, you can stand up for what is right. 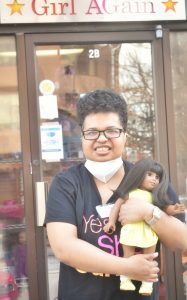 We learn Eurocentric history in school, we learn the history of White people. We don’t talk about it enough, about racism and the things Black people have done. There are so many Black achievements in America alone that we should be celebrating: Black Wall Street, The Little Rock Nine, Langston Hughes, Arthur Ash, The Williams Sisters, and so many more! If more people know about it we could start breaking gender and color barriers in society. Right now people are trying to update the Civil Rights Act that was being made during Melody’s story. Some of the legal language is outdated and not caught up with the times. We cannot just accept that what was relevant for Black and marginalized people during the 1960s is still all that’s relevant in 2022. We need to learn from history so we can make a better world for everyone to live in today.
You can learn more about Black history this month, and every month, by exploring Melody’s, Addy’s, and Cecile’s stories at Girl AGain boutique. Learning about Black history shouldn’t have to stop at the end of February. We hope to inspire you to make a change every time you visit our store.
Happy Black History Month!
References:
Patrick, Denise Lewis. Melody: No Ordinary Sound. American Girl Publishing Incorporated, 2019.
James Weldon Johnson, J. Rosamond Johnson. Lift Every Voice and Sing (1900). 1900, https://m.youtube.com/watch?v=ONgOH_tq7-Q.
By Yes She Can trainees Vanessa and Mo