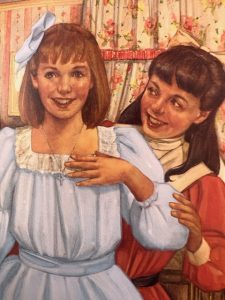 Saint Patrick’s Day is a cultural holiday celebrating the patron ‘Saint Patrick’ on March 17th. This holiday brings people of the Irish community together to have authentic Irish foods and beverages such as, ‘Shepherds Pie’, corn beef/cornbread, cabbage, bringing out Irelands signature beer ‘Guinness’, and ‘Bailey’s Irish Cream liquor’. This is usually mixed into a very delicious hot coffee beverage after the meal. New York City always has a parade that takes place along 5th Avenue between 44th Street and 79th Street.

Saint Patricks Day also includes Irish traditional music and bagpipes during the parades that go on in your local town in Westchester County and in New York City. The American Girl that mostly fits into this category is ‘Nellie O’Malley, who is a young Irish girl with strawberry blonde hair and blue eyes. Even though her parents are from Ireland she is not considered to be born there. Nellie’s parents were struggling hardworking immigrants that lived in New York City during the 1920s.

Nellies father worked in a factory as a driver and gardener. Nellie’s mother worked as a washer and they were both hired by Van Sicklens. But later in December during the influenza outbreak both of Nellie’s parents passed away and Nellie and her sisters Bridget and Jenny were taken in at an orphanage in New York City. Nellie worked as a servant for a short period of time at the manor of the Parkinton family. There Nellie met Samantha Parkington and her Aunt Cornelia and Uncle Gard.

If you are interested in knowing more about Nellie, Samantha, and other American Girl historic characters, you can visit us at Girl AGain boutique where you will find a variety of American Girl characters, outfits, accessories, and… MUCH MORE.

In celebration of Saint Patrick’s Day, we are having a music instrument SALE where you can get a set for as low as $8.99!

By Yes She Can trainee Abigail