Today, March 17th is Saint Patrick’s Day, which is a holiday that originated in Ireland. One of the American Girl historical characters was born in Ireland and moved to New York in 1904. Her name is Nellie O’Malley.

Nellie is best friends with Samantha Parkington who is a girl from the historical collection. Samantha was created by Pleasant Company and introduced in 1986 but Nellie was not released until 2004 and was the first doll of the “Best Friends” collections.

Nellie was born on October 15, 1895, in Ireland. She has two younger sisters named Jenny and Bridget. Nellie and her family moved to New York during a time when Irish people were not treated fairly. They were forced to work as servants and didn’t get properly taken care of.

Nellie and her sisters sadly become orphans when their parents die from influenza. After her parents pass away, Nellie is sent to work as a servant for Samantha’s neighbors, the Rylands. The Rylands have a son named Eddie who likes to tease Samantha and ends up teasing Nellie as well. While Nellie is working, she becomes friends with Samantha and spends time with her. A few days later, Nellie develops a cough and the Rylands send her away because they don’t think she will survive. Later, Nellie and her sisters are adopted by Samantha’s Uncle Gardner and Aunt Cornelia which makes Nellie part of Samantha’s family.

In Nellie’s stories, Saint Patrick’s Day is never mentioned but I know it’s a holiday Nellie would enjoy.

Saint Patrick was born in England and at age sixteen, he was captured by Irish raiders and taken to Ireland as a slave. He spent six years in captivity before escaping. We celebrate Saint Patrick’s Day on March 17th because that is when he died. Patrick is considered a Saint because he was able to do things like keep snakes out of Ireland. He also was known to see into the future. He also converted Irish people to Christianity. He was also known for being able to communicate with his ancient ancestors.

Come to Girl AGain where you will find Nellie and many of her outfits and accessories that I helped to prepare.

On behalf of Girl AGain we wish a very Happy St. Patrick’s Day to all who celebrate. 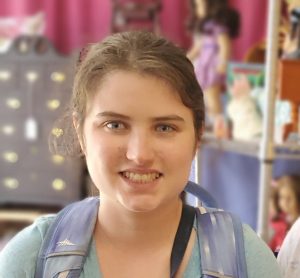