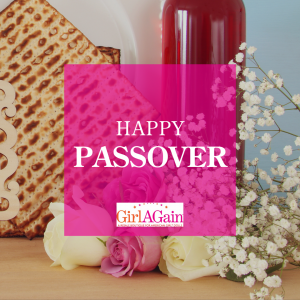 Passover is a Jewish holiday that celebrates the exodus of the Israelites from slavery in Egypt.  Passover is celebrated for eight days, though some Jewish reform groups celebrate it for seven days.  Passover starts in the spring. Over the past 3,000 years, Passover has endured as the most celebrated and widely observed holiday in the Jewish tradition.

Passover is celebrated with a feast called a seder on the first evening of the holiday. The seder has several prayers, symbols, and blessings specific for Passover and includes a special seder plate. The exact date of Passover changes every year because the Jewish calendar follows the lunar cycles instead of the 365-day solar cycle. During Passover, Jews eat matzah, a special type of unleavened flatbread because other types of bread are forbidden to eat during the celebration.  The middle piece of the Matzah called an afikomen is hidden in a house and younger participants of the seder are encouraged to search for it.

She is a child of immigrants living on the Lower East Side of NYC.

If you want to learn more about Rebecca, Lindsey, or any of the American Girl Characters, you can visit our store at
4 Martine Ave (2B). White Plains, NY 10606, or go to our website www.girlagain.com

Those of us who celebrate Passover at Yes She Can say Happy Passover or Happy Pesach which is Hebrew for Passover.

We want to wish you a very happy celebration! Enjoy the time with family and friends!

By Yes She Can trainee Mara